Is The Selfie Worth It? A Tiger’s Life at Tiger Kingdom

Is The Selfie Worth It?

A Tiger’s Life at Tiger Kingdom

There are SO MANY tiger selfies out there. Even Tinder1 is full of guys hoping a tiger pose will get them a swipe right.

Thailand’s Tiger Temple and Tiger Kingdom are the main attractions encouraging tourists to pose with tigers. In this report we take a closer look at Tiger Kingdom. And see what life is like for the tigers there.

Let’s start at the beginning.

Newborn cubs at Tiger Kingdom already separated from their mother and put in an enclosure.2

Cubs are immediately separated and hand reared by humans. There’s no kind reason to do this. It’s distressing for both and ruins any slim chance the cubs had of being released into the wild. From now on their survival is completely dependent on humans.

A healthy and happy tiger does not pose with humans. So cubs need to be trained from birth, without the protection of their mothers. Tiger Kingdom’s Head Tiger Trainer explains the process:

Each trainer is given a small bamboo stick which is used to control the tiger. If they behave badly they will be drubbed on the nose. This is how they are trained when they are very young. The stick is only used for bad behavior, but they are retrained every morning before the tourists come in.3

Tourists have reported seeing staff repeatedly provoking the tigers. Poking and tickling their face and ears. When the cat finally reacts it’s beaten on the nose, paws, rear and behind the ears. Some staff don’t even provoke, they just go straight in for the beating.4

It’s designed to work like Chinese water torture. The well aimed hits aren’t too hard. And within a 15 minute tourist slot it doesn’t seem too bad. But living with the unrelenting fear and pain breaks their spirits, making them submissive. Much like elephants in the phajaan.

The other obvious reason to separate the cubs from their mothers is because they’re extremely profitable. A lot of tourists won’t enter a cage with a fully grown adult tiger, but they would do anything to cuddle an adorable little cub.

This is reflected in the pricing structure:

This is what life is like for the tigers during these first 2.5 years…

At two months old they enter the tourist circus and training is well underway. YouTube videos like the one above show cubs being constantly hit in the face and head each time they move.

The only affection these motherless little cubs receive is from constantly revolving tourists. The trainers must intimidate the tigers at all times:

The trainers need to be in control, so they can’t hug the tigers or show too much affection. If there’s not a distinction and a tourist gets into trouble they will not know how to control the animal.7

In the wild a 2-3 month old cub would be leaving the den for the first time, playing and exploring the world around them.8 At Tiger Kingdom cubs cannot leave the concrete room.

Two months later and the cub’s worth has fallen 100 THB / Person.

They’re almost twice the size and graduate from the concrete room an into a larger outside cage.

In the wild a 4-8 month old cub would start observing it’s mother. Slowly learning how she hunts and survives.11 At Tiger Kingdom cubs are only taught one lesson. If you keep still you don’t get hit as much.

Training is still in full swing. In this video the tiger is hit 7 times from 4:02 to 4:13 until it slowly climbs into the pool. It’s hard to watch. The tiger moves so slowly, trying to guess what the trainer wants it to do.

They might be bigger, but they’re still just cubs. In the wild a 9-12 month old cub is still completely dependent on it’s mother, and starting to put the lessons it’s learnt from her into practice.14

Big tiger cubs being posed15 and bamboo sticks at the ready.16

When the cubs reach 13 months the cycle seems to break.

The internet has no shortage of footage showing smaller, small and medium Tiger Kingdom cubs being hit with bamboo sticks.

But there doesn’t seem to be a single image or video showing a big 13-30 month old cub being hit. Trainers still carry the sticks, but don’t appear to use them.

Some tourists report that that the big tigers were much more lethargic, and suspect they were drugged.17 18 19

Speculation of drugging has always surrounded Tiger Temple and Tiger Kingdom. There’s currently no evidence that either sedate the tigers, but many visitors are still convinced.20

Believe it or not, these massive tigers are still only cubs. In the wild they wouldn’t be able to hunt for themselves until 18 months, and would stay with their mothers until they’re 30 months (2.5 years old).21

A tiger sits in a cage at a farm in Vietnam. Photograph: Mike Ives, Associated Press

At 2.5 years old the tigers are adults and separated from tourists. This is seen as a good indication that Tiger Kingdom doesn’t use sedatives:

Adult tigers are often too dangerous and unpredictable for even professional handlers and it would be unethical to let you in. Chances are, any place letting you get close to tigers aged 30 months or older are either drugging or sedating them.22

But they’re not just separated. They disappear.

Both Chiang Mai and Phuket Tiger Kingdom are very small. The Phuket branch is smaller than the go-kart track next door. Neither have room to house an ever-expanding ageing population of big cats.

The website asks for donations to build ‘a more natural setting’ for them to retire to. But doesn’t mention where they are going now. Only that they must be isolated from each other to prevent fighting.23

It’s likely that when Tiger Kingdom’s tigers reach adulthood they’re sent to a different tiger farm. One that has more room and doesn’t have to keep standards high for tourist’s eyes.

Now they’re no longer generating tourism money, they only have two ways to pay for their keep…

Tigers are such good mothers cubs are rarely spotted in the wild. This image is from Tiger Canyons Sanctuary, South Africa.26

Females don’t reach sexual maturity until 3-4 years old, and males another year older. They will be sat in caged isolation 24 hours a day for years before this process can even get started.

(Take these figures with a pinch of salt. This math is very basic and based on the unlikely scenario that each tiger size is fully booked with the the maximum slots possible, year round).

Using our estimate those 6 litters of 4 cubs could be worth $88.5 million.

Keeping mothers in isolation and constantly removing their cubs is torture. Something Tiger Kingdom is well aware of…

What else can we do though? We can’t release them into the wild. The truth is there is no income and no provisions to take care of them otherwise, so we need to do this.28

Tiger cubs are big money. But if they stop earning at 2.5 years old, then live to 23 29the business model doesn’t work. Especially when Tiger Kingdom has put aside no income or provisions to care for it’s rapidly expanding population of adults.

They all need feeding, housing and vet care. But don’t earn any tourist money. So what do they do with them all? Especially once they’ve served their time on the production line?

The Department of National Parks, Wildlife and Plant Conservation (DNP) is supposed to prevent illegal trading and trafficking. All tigers born in captivity in Thailand must be registered and microchipped so the DNP can monitor them.

But if Tiger Temples history is anything to go by, the DNP is either incapable or corrupt:

February 2015 – The Tiger Temple vet confesses the three tigers had their microchips cut out.

April 2015 – Raid confirms three tigers are missing. Also finds 13 tigers with no microchips and a carcass in the freezer.

May 2015 – DNP suddenly retracts their decision.

January 2016 – Cee4life releases the ‘Tiger Temple Report‘. Evidence from a nine year investigation proving tigers have been illegally brought into, and taken out of, Tiger Temple.

At this point there is no official evidence for illegal trading at Tiger Kingdom. But with no where else for adults to go, a corrupt system and high demand for tiger parts. It’s not surprising Freeland reports it happens all too often.

Whether Americans want a ~quirky~ pet, or the growing Chinese middle class want to use traditional medicine as a status symbol. There is a LOT of demand for tigers:

You can help end tiger abuse!

Tourists don’t realize the cute cubs they cuddle will quickly grow and be butchered for traditional medicine.

Time to stop supplying the illegal wildlife trade, and start fighting it!

Step 2: Subscribe to become a travel rebel & stay in the know!

Step 3: Go on an ethical trip with tigers instead: Want to be a more responsible traveler?


Send me my copy 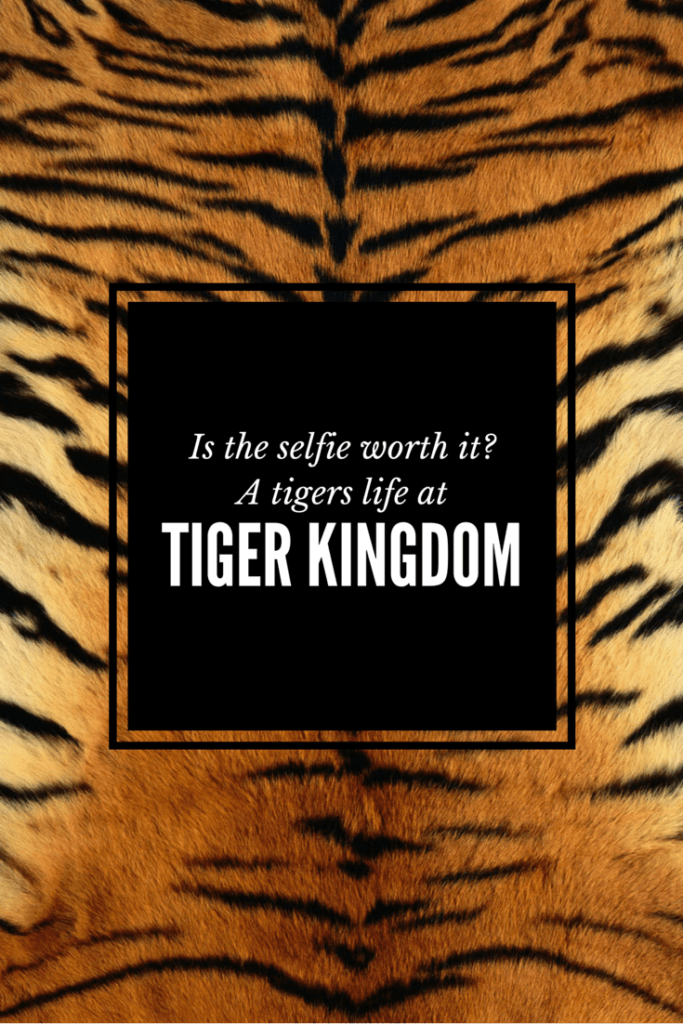